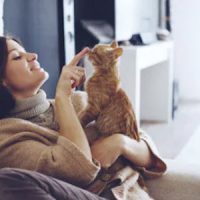 TIME magazine recently featured an article on just how prominent a part of divorce pets have become; to the point where some are spending upwards of $40,000 in pet custody battles if arrangements have not been addressed in pre- or postnuptial agreements. For a number of people, pets have essentially become the equivalent of children, and, in fact, these fights are becoming more and more common.

Still, the law has, unfortunately, struggled to keep up, and people suffer as a result: With the exception of a few states (not including Texas), most states treat pets the same as property, which leaves courts ill-equipped to address these custody battles. As a result, unless custody and visitation is spelled out in a pre- or postnuptial agreement, figuring out pet custody can be a long, drawn out, expensive process.

According to an American Veterinary Medical Association survey, 80 percent of pet owners consider their pets to be family members. Many of these are millennials, 70 percent of which said they would take leave from work to care for a pet if they could. In addition, 60 percent of men and 80 percent of women said they considered their pets to be their “fur babies.” More and more pets are also now adopted from shelters than purchased from breeders or stores, and most people now describe their pets as mutts, meaning that their value derives from something other than what their owners paid for them.

What The Courts Must Do in The Absence of an Agreement

In the instance of divorce, when pet custody is not spelled out in a pre- or postnuptial agreement, judges will typically assign custody based on who adopted or purchased the animal, or, if that cannot be ascertained, who paid for the animal’s care more often over the years. However, in some circumstances, where pets have been living together during the duration of a marriage, a couple may decide that the pets bonded over the course of the relationship, and may decide that they should stay together and split their time between the households after divorce. Still, unless this plan is solidified in an agreement, it is subject to being canceled or one person changing their minds; for example, if one person starts to feel that the other isn’t properly caring for the pets; which can then lead to a court battle.

Contact Our Texas Family Law Attorneys with Any Questions

There is no question that pets are more than property, and have awareness, emotions, inherent value, and sentience. Unfortunately, however, passage of new laws is often too slow to keep up with the reality of our lives. While of course many do not have the possibility of divorce on their minds when they marry, no one thinks that a fight for their pets is going to be the most painful part of their divorce either. To find out, years later, that it cost one’s entire savings in court costs to address the issue can be eye-opening, and enough to give you pause to broach the topic with your partner.

If nothing else is addressed in a prenup, perhaps at least your fur child should be. If you have any questions about pre- or postnuptial agreements, contact our Bronwsville family attorneys at Colvin, Saenz, Rodriguez & Kennamer, L.L.P. today to find out how we can help.