Addressing Alcohol Abuse in Custody & Visitation Determinations During the Pandemic 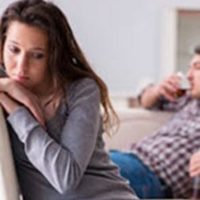 At least half of all US children are currently participating in distance learning programs, where they are participating in school from home all day. For many (typically) younger-aged children, this means that at least one parent has to be home with them in order to guide their instruction, and if that parent is working from home due to COVID as well, they have to balance teaching their child with their own work demands throughout the day.

There is no question that this has led to an increase in stress for a number of parents and families across the country, leading some to increase their consumption of alcohol at home: According to statistics, alcohol purchases (for home consumption) increased by more than 50 percent during the pandemic, all while those resources that are usually available to those already struggling with alcohol and other substance use addictions – such as being able to attend AA meetings – have largely disappeared due to COVID.

When alcohol abuse becomes an issue between divorced parents, it can lead to a custody and visitation battle involving the child, and, sadly, there are indications that COVID has already had this kind of impact: Just since the onset of COVID, a number of courts have already significantly increased programs involving handheld remote breath testers with cameras known as “SL2” devices, which are used when alcohol use is an issue in a child custody case.

How Do Experts Measure Alcohol Abuse?

However, it is important to note when alcohol consumption is actually considered to be a problem, or when it is considered to be an Alcohol or Substance Use Disorder. According to the DSM V, there must be a pattern resulting in significant distress, problems functioning, significant impairment, etc., which includes exhibiting/engaging in at least two of the following behaviors:

In many custody and visitation disputes, battling over whether one parent has a substance abuse issue, and proving it with evidence, becomes an issue, whereby one parent may try to seek records from a doctor’s office or recovery center in order to make the case to the court that it is not in the child’s best interest (and is in fact dangerous) for the child to spend time and/or engage in more than supervised visitation with the other parent who has the substance abuse issue. This is where patient confidentiality is at direct odds with the courts having access to all of the information that they need in order to determine what is in the best interest of the child in order to determine conservatorship and possession (those terms that Texas uses to refer to legal and physical custody).

While the Health Insurance Portability and Accountability Act (HIPAA) generally protects one’s records, there are loopholes and exceptions in the law as well. For example, HIPAA regulations allow for the release of protected health information in response to a discovery request, court order, subpoena, or other lawful process. However, there are also heightened privacy standards when it comes to substance abuse treatment, therefore courts typically weigh the value of having to obtain these types of records with the cost of potentially violating one party’s right to privacy by doing so, and will first try to find other means of obtaining information necessary to protect the best interest of the child. Judges can also order any party to undergo alcohol testing, including surprise testing, here in Texas.

If You Have Any Questions or Concerns About Alcohol Issues in Texas Custody Determinations, Contact Our Texas Child Custody Lawyers

At Colvin, Saenz, Rodriguez & Kennamer, L.L.P., our Brownsville family attorneys are personally invested in the families that we serve throughout the Rio Grande Valley. Contact our offices today to find out more about how we can help with any family legal issue, including child custody and visitation issues.