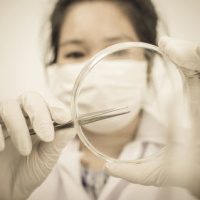 As more and more individuals delay having children and starting families, and reproductive technologies such as IVF contribute to more than one million babies being born within the last 30 years or so, embryo disputes have also become more and more common in family law because the law sometimes has difficulty keeping up with these advances. These disputes are the result of fertility clinics commonly freezing any unused embryos (known as cryopreservation), and couples who are either divorcing or otherwise separating then disagreeing about what should be done with those viable embryos.

This area of law is still very much developing, which means that there are still difficult questions left unanswered, and this is not only an issue that individuals may need to discuss with their family law attorney if they are separating or obtaining a divorce, but even as they are initially considering becoming involved in cryopreservation.

While most-all fertility clinics require that couples sign a written agreement dictating what will happen to any unused frozen embryos (where those options typically include discarding the embryos, donating them to research or another individual, or placing them in storage), that does not mean that court disputes do not often arise due to a number of circumstances; such as when:

Texas Court Decisions On the Issue

Embryo disputes after divorce was an issue of first impression in the Texas courts in 2006 in Randy M. Roman v. Augusta N. Roman. As is the case with a number of fertility clinics, before beginning IVF, the Romans agreed, in writing, that any unused, viable embryos would be discarded if they were to divorce.  However, upon divorce, Augusta Roman obtained a court order allowing her to take possession of the embryos based upon the argument that they were community property and should thus be subject to equitable division. However, the Court of Appeals for the First District of Texas reversed, upholding the contract that the couple had previously signed as enforceable and dictating that it is the public policy of Texas to allow a couple to enter into a voluntary agreement that determines what happens in these circumstances.

Because this is an area of law that is still developing, and contracts provided by fertility clinics do not always provide for clear resolutions, if you have gone through fertility treatments and signed any contracts, it is important to discuss these issues with your family law attorney. Individuals may also want to consider working with an attorney from the outset of any IVF procedure in order to ensure that they fully understand the implications of the contract that they are signing.

If you have any questions or concerns, the Brownsville family attorneys of Colvin, Saenz, Rodriguez & Kennamer, L.L.P. can help. Our attorneys are not only well versed in family law, but also other important, related areas, including contract law and commercial litigation. Contact us today to find out more.