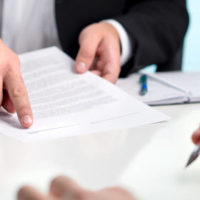 In late May, the U.S. Supreme Court made an important decision that will have significant implications for all employer and business contracts. Specifically, the Court embraced class action waivers in employment contracts, allowing for the continued use of arbitration clauses in order to facilitate the resolution of business disputes.

In its decision, the Court affirmed that Congress paved the way for arbitration agreements providing for individualized proceedings in the Federal Arbitration Act, and neither the saving clause of the Act, nor the National Labor Relations Act itself, could legally supersede this mandate.

The Federal Arbitration Act states that any written provisions in a contract requiring parties to arbitrate instead of litigate shall be “valid, irrevocable, and enforceable, save upon such grounds as exist at law or in equity for the revocation of any contract.” The National Labor Relations Act provides employees with the right to self-organize, form or join labor organizations, and bargain collectively. Thus, the questions at the heart of the case were whether a no-group arbitration clause (i.e. one that required individualized proceedings) violated the National Labor Relations Act and provided “grounds as exist at law” to bar a requirement like this, or whether the Federal Arbitration Act ultimately protects agreements requiring arbitration from judicial interference.

According to the Court, the Federal Arbitration Act’s savings clause – allowing courts to refuse to enforce arbitration agreements “upon such grounds as exist at law or in equity for the revocation of any contract”—only recognizes contract defense such as duress, fraud, or unconscionability. The Court also held that the requirements held forth in the National Labor Relations Act cannot override the guidance provided in the Federal Arbitration Act unless there is a “clear and manifest” congressional intent to displace the one Act with the other. Otherwise, the Court must strive to give effect to both, presuming that Congress will specifically address preexisting law before suspending the law’s normal operations in a later statute.

Perhaps more obviously, while the Nation Labor Relation Act address the right of employees to organize unions and bargain collectively, it does not specifically mention class or collective action procedures, or indicate any desire to displace the requirements of the Federal Arbitration Act. In fact, collective actions were hardly known when the National Labor Relations Act was adopted into law; the law was geared towards protecting the right to free association in the workplace.

Businesses (and employers) are the clear winners of this ruling, and the decision will inevitably resolve thousands of cases currently tied up in appeals courts that involve arbitration agreements (in favor of employers and businesses).

The Brownsville commercial litigation attorneys of Colvin, Saenz, Rodriguez & Kennamer L.L.P. have provided strategic legal advice to businesses in forming business and employee contracts for more than 60 years in Texas. Contact us today to find out more.