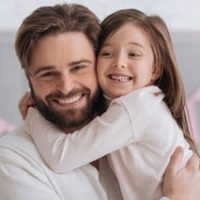 A number of parents—especially fathers—often find that divorce turns them into better parents because it forces them to take on more responsibility instead of waiting for their spouse to handle something or provide instruction to them. In other words, a number of fathers find divorce enabling as a parent.

This is definitely an emerging trend as more and more men are advocating for equal custody of their children and therefore becoming their own advocates ad better single parents. Now the research as well indicates that divorce can provide dads with the ability to become better parents, and this is coming around to change custody arrangements more as well. In fact, more and more divorced parents are taking a knowledgeable and enlightened approach to co-parenting in general. No longer weighed down by marital conflict, these divorce parents are essentially parenting better with more focus. Some of this unquestionably also has to do with the freedom and happiness that some experience as a result of divorce as well.

Specifically, divorced dads are taking on what researchers referred to as “executive parenting tasks”; spending more alone time the kids, delegating less and less to their partners; which means getting more and more practice taking care of their children and connecting with them emotionally. This also includes all the basic stuff: comforting babies., healing wounds, singing lullabies, etc. By doing this more as single parents, they are becoming more adept caretakers.

These results directly contradict the age-old theories that effects of divorce are all negative. In fact, according to these researchers, marital conflict is the problem, where divorce can be the solution. Regardless, there is no question that children with divorced parents who spend a “regular” amount of time with their fathers–i.e. Overnights, 50-50-splits, etc.–do better academically and are less susceptible to problems in general; regardless of their age. In fact, these children end up being just as well-adjusted as children whose parents never divorced.

Bringing This Research Into The Courts

Research like this is important because–even though custody laws are changing as underlying assumptions about male and female caregivers are changing and states encourage 50-50 custody split–still, it is important that fathers not be treated unfairly and not taken seriously as caretakers in the courts. In fact, divorce can often make both mothers and fathers better parents because both of them have downtime to recharge when it comes to shared parenting.

In the same way that age old stereotypes about boys being more biologically predisposed to a outperforming girls when it comes to certain academic subjects, it is harmful for similar messaging about men being secondary parents to be perpetuated. It is also crucial that these stereotypes do not become self-fulfilling prophecies as well, and it is especially crucial to recognize that most kids wish that they had more time with their dad growing up.

If you are a divorcing father in Texas who has concerns about custody arrangements, contact our experienced Brownsville family attorneys at Colvin, Saenz, Rodriguez & Kennamer, L.L.P. today to find out how we can help.